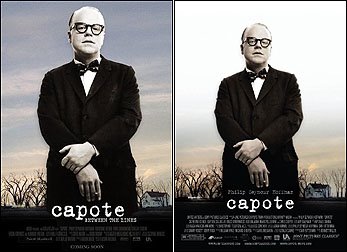 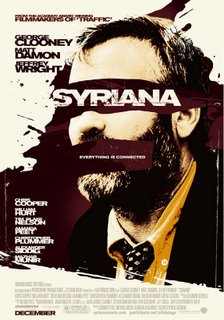 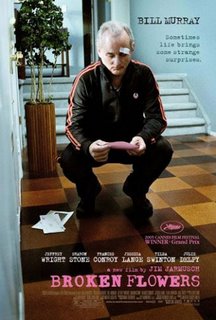 
美影評人Christy Lemire挑選:
The Squid and the Whale
Capote
Syriana
Good Night, and Good Luck
Murderball
Crash
The Upside of Anger
Broken Flowers
Tell Them Who You Are
Wallace and Gromit: The Curse of the Were-Rabbit

似乎"Capote", Syriana", 及"Broken Flowers" 都是兩人心水之選, 不知香港會否上影.
"Capote" directed by Bennett Miller
plot outline: Truman Capote (Philip Seymour Hoffman), during his research for his book In Cold Blood, an account of the murder of a Kansas family, the writer develops a close relationship with Perry Smith, one of the killers.
Philip Seymour Hoffman 雖然其貌不揚, 個人一直有留意他, 較港人熟悉的參與電影有: "Happiness" (1998) (你快樂嗎?) - 當中有大膽演出, The Talented Mr. Ripley (1999) (心計), Cold Mountain (2003) (亂世情天).
"Syriana" directed by Stephen Gaghan
plot outline: A politically-charged epic about the state of the oil industry in the hands of those personally involved and affected by it.
starring: George Clooney, Matt Damon and Jeffrey Wright
"Broken Flowers" directed by Jim Jarmusch
plot outline: As the devoutly single Don Johnston (Bill Murray "Lost in Translation" (迷失東京)男主角) is dumped by his latest girlfriend (Julie Delpy "Before Sunrise" 及 "Before Sunset"女主角), he receives a anonymous pink letter informing him that he has a son who may be looking for him. The situation causes Don to examine his relationships with women instead of moving on to the next one, and he embarks on a cross-country search for his old flames who might possess clues to the mystery at hand.
張貼者： mad dog 於 12/30/2005 12:00:00 PM