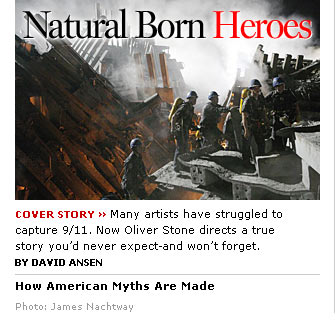 Oliver Stone: "If this movie is what I hope it to be, it transcends 9/11. It's about anybody, anywhere, who feels the taste of death. It's the theme of being trapped."

2002
Jan 15
Alan Jackson, 'Where Were You (When the World Stopped Turning)' -- The country-music star wrote the song late one night in his pajamas: 'I was reluctant about it. I didn't want to appear like I was taking advantage.'
March 11
'Tribute of Light' -- For 32 nights, two banks of 44 lights formed towers in New York's night sky
March 26
Neil Young, 'Let's Roll' -- Rocker's tribute to brave United 93 passenger Todd Beamer
April 4
Jonathan Safran Foer, 'Extremely Loud And Incredibly Close' -- Novel about a quirky boy whose dad was killed on 9/11
May 26
'In Memoriam: New York City'(HBO) -- Potent 9/11 doc narrated by Rudy Giuliani (the Mayor)
July 23
Toby Keith, 'Courtesy of the Read, White and Blue (The Angry American)' -- A vengeful and controversial country-music hit single
July 30
Bruce Springsteen, 'The Rising' -- Album based on his talks with 9/11 widows
Aug 5
Maira Kalman, 'Fireboat: The Heroic Adventures of the John J. Harvey' -- Kid's-book author's tale of a boat used on 9/11: 'I was crying while I was painting it. It was cathartic to write a story in which humanism prevails.'
Aug 20
Lisa Beamer, 'Let's Roll' -- A memoir of grief by Todd's widow
Sept 11
Eric Fischl, 'Tumbling Woman' -- Sculpture evoking victims who leapt from the towers; removed from Manhattan's Rockefeller Center due to complaints
Sept 19
John Adams, 'On the Transmigration of Souls' -- Classical music piece inspired by missing-person notices
Oct 28
Tori Amos, 'Scarlet's Walk' CD about America post-9/11: 'It's easy to point the finger at "evildoers," but think of the genocide that happened in this country. Go talk to the Cherokee nation.'

2005
Jan 12
Jim Dwyer and Kevin Flynn, '102 Minutes' -- Two reporters document the moments between the attacks on the towers and their rapid collapse

2006
April 28
'United 93' -- Hollywood's first 9/11 film, directed by Paul Greengrass
June 6
John Updike, 'Terrorist' -- Famed author's tale of a Muslim suicide bomber: 'The phenomenon of a homegrown terrorist will be with us for a while,' he says.

shd hv included the song "To Where You Are" fr. Josh Groban too ne...

oh i like Josh Groban too... u must have a collection of his CDs. :)